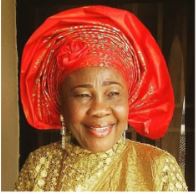 Juliana Omonemi Anaweokhai was born on Tuesday, July 9th 1946 to Mr. Joseph and Christiana Anaweokhai in the bustling commercial town of Onitsha, Anambra State (Formerly known as Eastern Region). The second of six children. Juliana was born a devout Catholic and was baptized and confirmed at Holy Rosary Catholic church, Onitsha. However in 1992 she gave her life to God in Benin City, Edo state.

Juliana attended Holy Rosary catholic school. She grew up with a desire to be a nun but the untimely death of her mother at age 13 changed the course of her academic and subsequently, her career direction. After the death of her mother, she went to live with her uncle where she completed her Standard six at Immaculata Conception Convent Primary School. After completing her primary education, she went to live with her eldest brother, Chief Vital Anaweokhai in NIFOR, near Benin. She later went on to Teachers training college in Warri and then went on to complete her Grade 2 in 1966 and further to Nigeria College of education, Abraka and bagged an NCE in 1978 before proceeding on her NYSC (National Youth Service).

Juliana became a teacher and taught Geography for 27 years before she retired voluntarily in 1993. Juliana’s love for academic stirred her to open her own school. In 1994, Brighter Tomorrow group of schools was born. In March 2002, she joined the Redeemed Christian Church of God (RCCG), Blessed Parish Auchi, where she went on to be a full Ordained Pastor in August 2015. For Juliana, giving her life to Christ is the greatest thing that has happened to her. With all her accomplishments she never fails to ascribe it all to God. She uses the phrase “If Jesus tarries” so often that it’s now been a part of her. Looking at Juliana’s journey over the last 70 years would make anyone awed by the magnificence of God’s grace.

First full ordained RCCG female Pastor in Edo province 3 and currently the state deputy president of National Association of proprietors of private school in Edo state, Julie is a mother, a teacher and a preacher of the gospel of Jesus Christ. In acknowledgment of her immense contributions to the development of Ogbona community, she was conferred with a chieftaincy title in 1995 as the UFIOLE of Avianwu by the Ogieavianwu of Avianwu.