Late Chief John Anabor had a very humble beginning as the father; Chief Anabor Atogwe was one of the most respected Daodu in Avianwu Kingdom. Though he had no formal education, Chief John Anabor at an early age had a clear vision of what life could be and as such equipped himself with a very high level of intelligence that would help him to transform into greatness.

Chief Ikuku Anabor made an indisputably rapid progress in life. He started farming career at an early age under the strict supervision of his father. From the little savings he made from farming, he was able to marry and establish a Trading Business in 1960 and 1961 respectively. His marriage to Miss Fatima Orbih ( a woman of excellence ) brought invaluable and estimable progress to the family .

The Trading Business established by “Baba Oyegun” as he was fondly called expanded the status of the business to the standard of a supermarket by 1961. Baba Oyegun trans versed the Eastern and Western parts of Nigeria to buy stock for the expanded business. He started with Onitsha Main market but when the Civil War broke out in 1967, he changed his routes to Ibadan and Lagos market. His main sources for his stock were Dugbe and Mokola markets in Ibadan and Oyingbo, Ebute Ero and Idumota markets in Lagos. In 1971, he further expanded the business to include sales of liquor. As at this period, only off License permits were issued to liquor dealers.

He was the first trader to obtain an “on Liecence in Avianwu”  “on License” indicates that you can buy and consume liquor at the place of purchase.

Baba Oyegun had a great passion for politics. He was a quintessential politician who remained indomitable and unbeatle in his political career. He was never self-centered as equity and fairness were his political philosophy. His political journey started in 1951 when he became one of the founding fathers of NCNC in Afenmai Division. He later defected to Action Group in 1962 till when the military took power via a coup de tat in 1966. When the ban on political activities was lifted in 1978, he pitched his political tent with the National Party of Nigeria (NPN). He was elected the Youth Leader for Avianwu Ward in 1979 till 1983 when the military struck the second time in 1988, when the ban on politics was lifted again, he became a member of the All Nigeria People’s Party (ANPP) and later defected to the People’s Democratic Party (PDP) in the year 2005. He was elected the PDP Ward Leader for Ward 4 in 2011; A position he maintained till his demise on the 3rd of November, 2021. It is historically recorded that this bold and fearless politician never lose election in this Ward inspite of the political intimidations and gangsterism perpetuated by the then Ruling Party in the state.

Aside politics, Chief John Anabor worked as a civil servant with the Authorities of the University of Benin Teaching Hospital. He was the Head of the Horticulture Unit where he worked meritoriously and compulsorily retired in 2011.

Chief John Anabor was a community leader who displayed uncommon leadership qualities. As a result of his sterling leadership qualities and his contributions towards the development of Avianwu Clan, he was honoured with the chieftaincy title of  “Ekhayoumo of  Avianwu Kingdom” by the Late Royal Majesty (HRH Chief P.A Oboarekpe) in the year 2007 .

Also, because of his roles in ensuring peace and harmony in Ogbona land, he was installed by the sub-clan head of Ogbona ( HRH Chief Willy Idode) as the Oghie Isese of Ogbona land in year 2012. The Isese Chiefs are the wise men responsible for peaceful resolutions of all family and inter-family conflicts in Ogbona. He was the sage that piloted the affairs of this Palace for almost 10 years.

Baba Oyegyun as he was fondly called by his children was an umbrella /pillar of the support to many families. He provided financial, material and guidance services for very many people.

He was the patriarch of the Atogwe’s family of Ogbona. He united the entire family and led them in their family meetings which were held weekly.

Though he was not literate, he had great passion for education. He starved to ensure that all his children, grand children and foster children got the quality of education they desire. He was full of human kindness. Because of his humane nature, he gave scholarship to five Ogbona indigenes to study in various Higher Institutions of learning.

Chief John Ikuku Anabor was born into a Mulism family and given the name “Busari”. He converted to Christianity in 1955 and was baptized into the Catholic Faith in 1957 by Rev. Canaan who was accompanied by Rev. Fr. M. Grace of blessed memory. He wedded his loving wife in the year 2010 to further buttress his commitment to Christendom. He was a cheerful giver and a pillar of support to church development. His assistance towards church development was not restricted to the Catholic Church alone.

Chief John Anabor made friends and kept them till old age. He had them in quantum and in droves, both old and young, males and females, strong and feeble, rich and poor, particularly the later. His friendship with Chief Azuaye Umoru was something else. They were like soul mates and siamese twins. Also, Chief Jacob Orbih, though an In-Law to him, was like his twins brother. Emmanuel Otoaye and Mallam Kasimu Esimhekua were his pet friends. He kept them till he went to rest eternally with his creator . 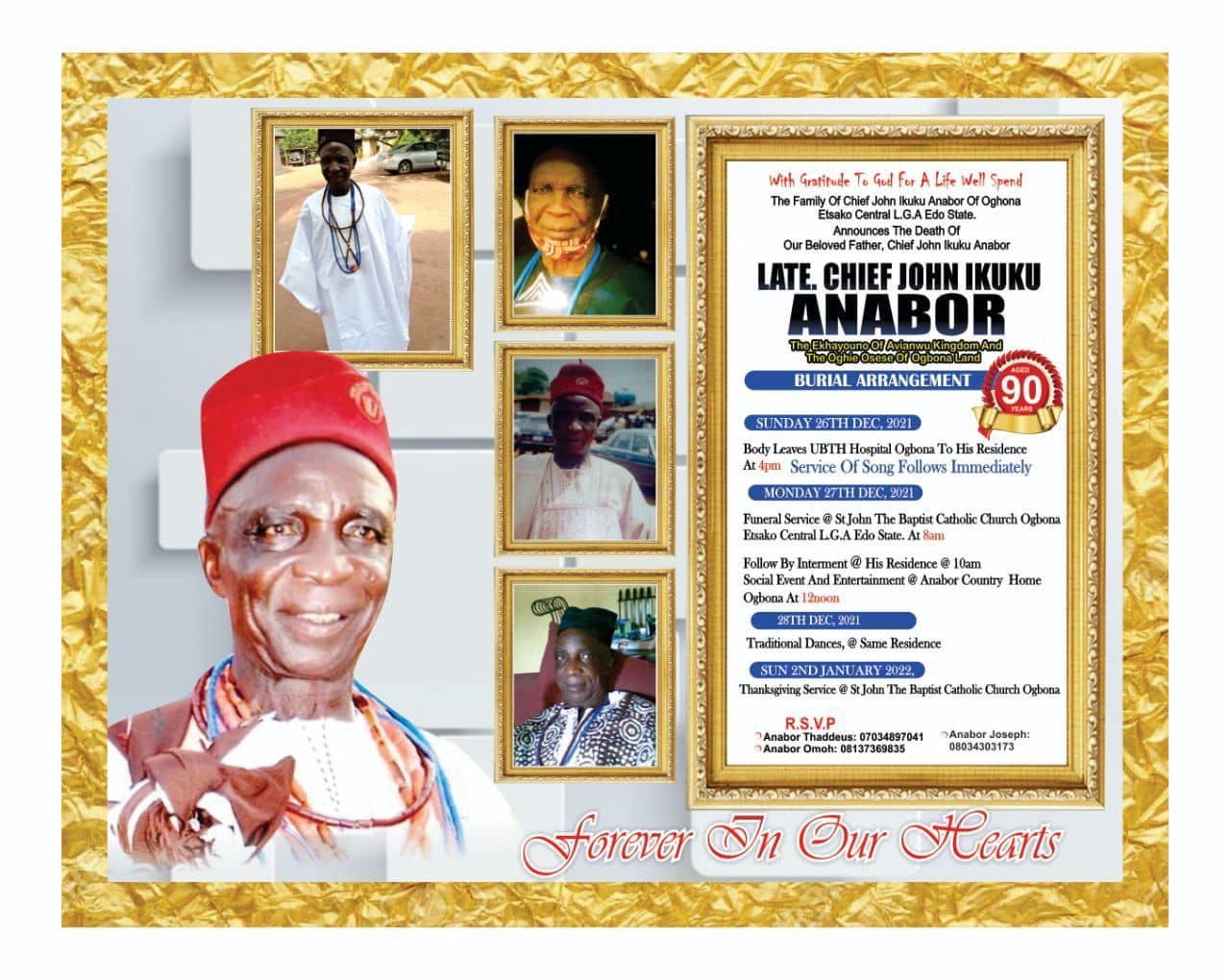 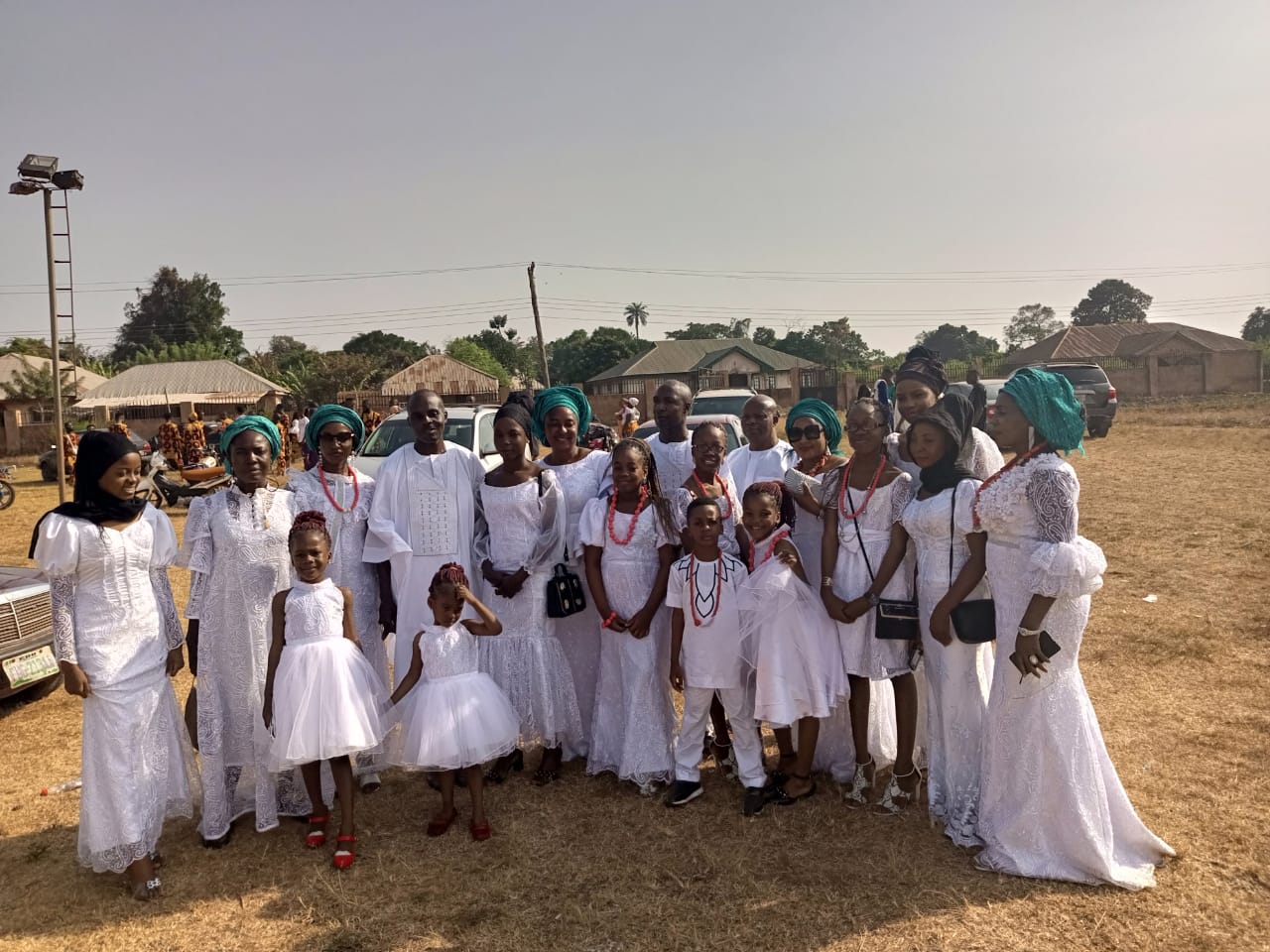 It was a celebration of a life so beautifully lived in Christ to be beautifully Remembered.

Late Chief John Ikuku Anabor came, saw and conquered. His life was characterized with humility, hardwork and dedication to the service of God and his community.

He was a voice to the voiceless, the less Privileged and the downtrodden in the society and a Social Crusader par excellence. His demise, no doubt, has created a huge vacuum in the Anabor”s dynasty of Ogbona in Etsako Central local government area of Edo State..

No wonder, his final burial ceremony attracted eminent personalities who came from far and near to eulogise the passage of a Man who lived for humanity.

Chief Ikuku Anabor was a man of many parts. He was a devout Christian and a member of many Social cultural Organizations. His reign brought sanity, discipline and unity to the organizations.

Late Chief John Anabor was Elegant and kind -hearted to everyone who crossed his part. He was a selfless community leader who endeared himself to the heart of his people through his humanitarian and Philantropic activities. He died at a material time his valuable services were most needed by the community.

He was a great Man and a genuine humanist par excellence who lived for Christ. He represented what the family stands for which are respect, love and togetherness. He was the Leader of the Osese (Peace Maker Group) in Ogbona community.

The Funeral ceremony which took place at his Residence at Ogbona recently would remain remarkable in the annals of the community. Guests and locals who came to pay their last respect were treated to a lavish reception.

Expectedly, it was also a medium for reunion by family members, friends and well Wishers.

Late Pa John Ikuku Anabor was a man of inestimable value whose leadership qualities spread to all spheres ..

The Eldest Son of the deceased and Principal of Ogbona Senior Secondary School, Mr. Thaddeus Anabor, described his late father as a perfect gentleman, lover of peace, bridge builder, a provider and above all a stainless man who spent his life for the happiness of others..

Patriarch Chief Ikuku Anabor was an exceptional man, a disciplinarian, a resourceful man and a caring father whose life was a lesson in strict compliance with the Christian faith. He was a man who will be remembered for his contributions to the advancement of the community.

Happiness, love and peace were his fellow travelling companions. He was a man who had respect for all irrespective of your age, tribe, religion and status in the Society.

Late Chief John Anabor died at the age of 90 years.