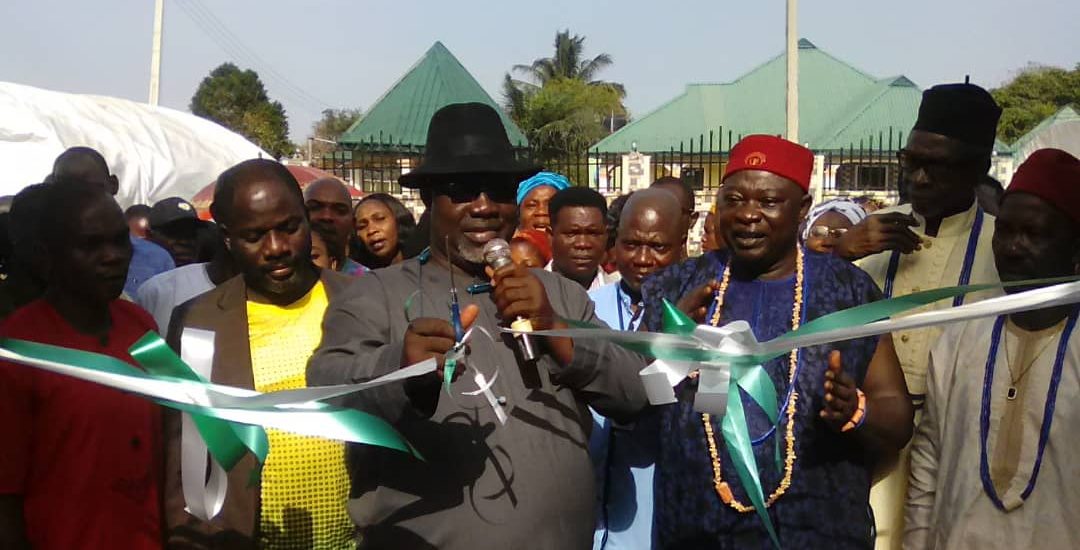 The chairman made the commendation during the commissioning and taking over 80 open market stores built by the community through self-help effort as a way of modernizing their market.

He said it was the primary responsibility of any government to provide social amenities such as market for the people and also taking over the running and maintenance of such a market.

While congratulating the Ukpe-Ukpi of Ogbona, Chief Willie Idode for the numerous communal developments, said it is the only community that has not been waiting for government before they start any project in their community.

The chairman said that government will do everything possible to see how the market can be expanded to accommodate both local and foreign traders.

He however appealed to the palace chiefs for adequate cooperation with the council staff in the area of revenue collection so that the council can do more for the people.

Welcoming the chairman and his entourage to the official handing over of the market to the local government, the Village head and the Okphe-Ukpi of Ogbona Sub-clan, HRH Chief Willie Idode said the project was a dream come true.

He said that the construction of the market started in 2009 with the assistant of the then local government chairman which today has been a fulfilment of purpose.

He however appealed to the chairman to as a matter urgency construct speed breaker along the highway to help control speed of vehicles around the market.

Highpoint was the cutting of the tape by the chairman for the commissioning.

ADDRESS PRESENTED BY HRH WILLY IDODE (THE OKPHE UKPI OF OGBONA) ON OFFICIAL HANDOVER OF OUR MARKET TO THE LOCAL GOVERNMENT, APRIL 12TH, 2019

It is with joy mixed with a little sadness that I welcome you all to this occasion which marks the official handover of our market project to the Etsako Central Local Government Council. Ordinarily, our joy today should be boundless. We appear to be the last community on this highway to establish a market close to it.

Let me give a historical background. This Auchi Agenebode road was constructed and made motorable about 1976. We had expected that it would go through Ogbona town but unfortunately, as it seemed at the time, it bypassed the town. As it is with roads everywhere, our people soon started experiencing disadvantages. Vehicular traffic through the town was greatly reduced so much so that our people were dropped on the road to trek to their houses.

Our only market was also affected as commercial vehicle drivers would no longer ply the dilapidated township roads. It was at this point that there was an attempt to move the market close to the highway or building a new one. Disagreement, mainly associated with the politics of traditional hierarchy, set in. The attendant delay caused by this disagreement is regrettable. But as we usually say, it is better late than never.

It was, however, in 2009 that our community commenced work on the construction of this market with the active and generous assistance of the Local Government Administration of Hon. Joseph Ugheoke. We are grateful to him for coming to our assistance.

As we hand this market with ………open market stalls over to the Local Government Council today, we declare it as work in progress. We expect and appeal to the Local Government Council to expand it. As with other communities which suffered same fate with the construction of this highway, we appeal to the council chairman, as a matter of urgency to put speed breakers along the high way to help to control the speed of vehicles around the market

Our Comrade Chairman, destiny, fate and perhaps our ancestors may have conspired to ensure that it is during your administration that this Ogbona main market is being handed over to the council. We urge the council to take full control of it, manage it to the mutual benefit of the government, the indigenes and all those who buy and sell here. We congratulate you and wish you a very successful tenure.