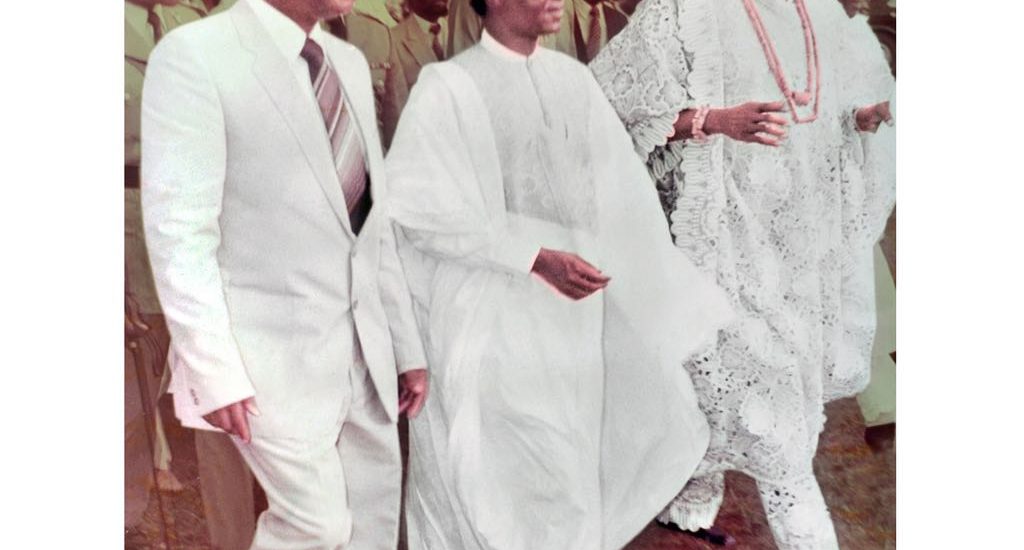 It will be difficult to understand the relationship or connection between UBTH and this great educationist and worthy son of Ogbona without a peep into the political antecedent of the man Chief Michael Clement Kadiri ORBIH.

Chief MCK equipped himself with a Grade iii Teachers Certificate in 1946, followed by Grade II Teachers’ Certificate in 1948 in the same institution -St John Bosco’s Teachers’ Training College, Ubiaja. He had a very rewarding Teaching career with many of the students who passed through his tutelage as their headmaster in Primary Schools or their Principal at the Blessed Martins Secondary Modern School, Jattu. Uzairue, are now old Professors and distinguished professionals in various fields of human endeavours.  He made his foray into politics in 1954 when he contested and won the election to  represent his Clan at the Etsako District Council at Auchi as headquarters, on the platform of the National Council of Nigeria and Cameroun (N.C.N.C)  Party, led by Dr Nnamdi Azikiwe.  In 1957, he attended the Institute of Administration, Ahmadu Bello University. Zaria, where he obtained the Certificate in Local Government Administration.

Towards the end of the British Colonial era, the Pre-Independence years (1956-1959), Chief MCK Orbih, acceding to the yearnings of his people, joined the Action Group (A.G) Party, under the leadership of Chief Obafemi Awolowo from Ikenne, Western Region of Nigeria. In 1957, Chief Orbih was appointed a member of the Western Region’s Advisory Board of Education.

On December 12, 1959, Chief MCK Orbih took the big plunge into the vast National political landscape. He contested and won the Federal Elicitation into the House of Representative in Lagos on the Platform of A.G Party, thus becoming the youngest Member of Parliament (M.P) in the House, at Nigeria’s Independence on October I, 1960.  For five years, he represented his people of Afenmai Constituency well.  From his brilliant contributions to debates on the floor of the House, he left no one in doubt that his main reason for being in politics was for the socio-economic development of his people and country.  In and outside Parliament, the young and ebullient Honourable MCK exhibited his attributes of a man of strong and selfless character and infectious amity.

With the first Nigerian Military Coup that overthrew the civilian government of Alhaji Abubakar Tafawa Balewa, on January 15, 1966, the political glamour of the First Republic was over and many politicians went underground while some fled the Country, but Chief Orbih like few others, and went back to his roots to continue his continue his private business among his people unmolested. After a long period of Military interregnum (from 1966, which included counter coups, change of governments, three years civil war and post- war reconstruction; the ban on political activities was lifted.

Chief MCK Orbih became one of the founding Leaders of the National Party of Nigeria NPN)-one of the few new major political parties registered to contest elections for the Second Republic. The National Party of Nigeria, NPN presented Alhaji Shehu Shagari as its Presidential flag bearer while the Unity Party of Nigeria (UPN) and the Nigeria’s Peoples Party (NPP) presented Chief Obafemi Awolowo and Dr. Nnamdi Azikiwe respective flag bearers. A confident, courageous, an experienced political motivator, mobilizer and experienced organizer that he was, Chief Orbih decided to return to Parliament by contesting on the platform of NPN in the new elections scheduled for middle of 1979. MCK was fully aware he was going to run against his former Party its Flag bearer, then the Presidential flag bearer of the new Party UPN in the new political dispensation.

As a well-known loyal and dedicated party leader, Chief Orbih with other leaders campaigned vigorously not only for his candidacy in his Constituency but also throughout the State for the NPN’s Gubernatorial and Presidential Flagbearers for the State and Country respectively. Election Day came. Voters, turnout was massive and impressive. Field report indicated that MCK. Obviously adjudged the most popular candidate, was coasting home to a very comfortable victory over his main opponent. The result from his constituency, which was awaited with keen interest was delayed for nearly 24 hours; by the time the results were announced the following day, the National Election Commission (NECO), declared MCK Orbih the “loser”, with their figures allegedly concocted by the known chief collating officer and chief returning officer from the area, to the chagrin and consternation of teeming NPN supporters who were spoiling for War. He told them to be peaceful and “leave things to God who knows best.” MCK would insist that Politics should not lead to the flow of human blood; if it does, it is no longer Politics but War! In the final analysis, Ambrose Ali, a Professor of Morbid Anatomy at University of Benin Teaching Hospital (UBTH).  won as the UPN Governor of Bendel State. Alhaji Shehu Shagari of the NPN, won the Presidency with very impressive showing against Chief Obafemi Awolowo, even in Bendel State.

On October 1, 1979 Alhaji Shehu Shagari was sworn in as President of the Federal Republic of Nigeria in a handing-over ceremony by the Military Government of General Olusegun Obasanjo. Early in June 1980, the appointment of Chief MCK Orbih as Chairman of UBTH. Management Board was made, with others. The inauguration and first general meeting of the Boards of all the 10 Federal Teaching Hospitals at that time was held in Lagos under the Honourable Minister of Health in Lagos on 13th June 1980. In an official Congratulatory message to Chief MCK Orbih on his appointment, President Shehu Shagari, on 17th June 1980 wrote:

“I feel particularly delighted to congratulate you on your appointment as Chairman of University of Benin Teaching Hospital.

While you may not know it, your unsung attributes were more than sufficient to have secured you this responsible and demanding post. It was not necessarily due to the fact of your membership of a particular political party.

President of the Federal Republic of Nigeria

Being a master strategist and articulate planner, he meticulously read all briefs he received from stakeholders in and outside the Hospital to prioritise his action plan. Encouraged and armed with such pleasant words and directives  from  the most powerful man in Nigeria at that time, the Man MCK, swung  into action without waste of time, to do what he knew how to do best,

And so, he held his first Board meeting at UBTH on the 8th of July 1980. For him, it was a full-time job on the chair of a Board almost completely composed of internal professionals of varying contending Interests. Within a year, the Board had addressed and settled the issues of Staff appointments, employment, promotions, training and welfare. There was general improvement in the supply of medicines and equipment to the hospital.

In 1982, the Federal Government approved the proposal of the Federal Minister for Health, Mr Daniel Chukwu, to establish two Comprehensive Health Centres for the UBTH. The concept of Comprehensive Health Centre (CHC), in design, equipping, staffing and functionality, or a mini Specialist or General Hospital; it was supposed to be located in a depraved rural community far away from but still accessible to the main Hospital. A minimum number of middle level Health staff across general medical disciplines were supposed to be resident in the Centre to diagnose and treat the rural patients. Medical, Nursing and midwifery students doing their professional trainings were supposed to go on periotic rotation to these Centres to learn about the health problems in these communities, and how to manage them.

OGBONA in Etsako Central Local Government in Edo North, and UDO in Ovia South-West Local Government of Edo South fulfilled all the criteria for siting the 2 Comprehensive Health Centres in their locations. It was therefore easy for the enigmatic MCK to use his political dexterity cum democratic political experience to secure unanimous support from the Board, of which he was Chairman, for his choice of OGBONA-his home village, and UDO for the Projects. The man of destiny used the opportunity of history to bring better health closer to his people. The Comprehensive Health Centres were also expected to create employment low and medium level indigenes in and around the communities.

On 29t h July, 1983, the University of Benin Teaching Hospital Comprehensive Health Centre, Ogbona, was officially opened, with the unveiling of the ceremonial plaque by the Honourable Minister of Health Mr D G Ugwu.   The colourful ceremony witnessed prayerful thanks-singing, cultural dances and shooting of Dane guns to entertain the people of Edo North and their visitors from other parts of the State and beyond.    Similarly, the following day, 30th July 1983, the UBTH Comprehensive Health Centre (CHC), at UDO was officially opened.

However, workers of various units or departments were coming from Benin to attend to patients at the Comprehensive Health Centre, Ogbona on a daily basis for the first few weeks before changing the system to monthly basis until when redeployment was made for some workers to be posted to their various units to treat patient and refer serious cases to UBTH, Benin for proper management.

The Clinic was initially open to the general public. Mondays – Friday 7:30am – 3:39pm whilst those receiving dressing and injection were attended to on Saturdays and Public Holidays from 8:00am – 1:00pm and is fully opened now for (24hrs) twenty-four hours daily by the introduction of shift duties and call duties.

SOME OF THE PROBLEMS OF CHIEF M.C.K ORBIH COMPREHENSIVE HEALTH CENTRE, OGBONA